This post was written during flights home from a project in central Queensland. Maybe I need to travel more often in order to publish at a more useful rate.

The previous 2 rules of thumb focused on strength, estimating the safe capacities of common design details in tonnes. This post takes a brief diversion to the opposite side of the equation, with a trick to help determine some applied loads (also in tonnes). This is more a visualisation aid than a rule of thumb – I’ve found it useful when estimating the mass of plate fabrications, both in the field and on paper, but it might not be to everyone’s liking. There’s nothing magical about it; the beauty of such tricks is that they use a number of relationships many of us are already familiar with, and this helps make them easy to remember and apply.

For example we already know that the plates found in normal steel fabrications come in only a handful of standard thicknesses. The thinnest in many industrial applications would probably be 6mm (the metric equivalent of the old ¼ inch plate). Depending on where you live, there are probably only 20 or so standard plate thicknesses between 5 and 100mm.

Imagine a patch of one of these plates. How many of these patches would you need to stack up in order for the pile to reach 1m high? Choosing 25mm plate for example – you’d need to stack 40 patches to get a pile 1m high. Alternatively, 50 pieces of 20mm plate would be needed for a 1m pile, or 100 pieces of 10mm plate. Symmetry hides a useful economy here; I could also stack 25 pieces of 40mm plate, 20 pieces of 50mm plate, or 10 pieces of 100mm plate for the same result. Already, the number of relationships you need to remember is shrinking. It gets a bit untidy with thicknesses not nicely dividing into 1000, like 6, 16, 32, 45, 60, and 70mm etc., but remember this is an estimating aid, not a physics experiment, so the nearest convenient integer number of plates stacking to about 1m is plenty good enough.

Now here’s the trick, imagine each of these patches is square with edge 1 metre. The pile you’ve just created will now have a volume of 1 cubic metre (and you don’t even need to stack the patches neatly!). Put another way, the number of patches you had to stack up is the number of square metres of the chosen plate thickness required to occupy a volume of 1 cubic metre. For example, 40 square metres of 25mm thick plate has volume of 1m³. So would 20m² of 50mm thick plate, or 100m² of 10mm plate.

Now what? Well…, it’s often easy enough to estimate the number of square meters of plate in a fabrication. You can pace it out in steps, use a tape measure, lift the dimensions off the drawing, or who knows, you might even have derived a magic relationship between the plate area and your painting bill:) All that’s left to do is to multiply the area by 8 and divide by the number of patches in your stack. Voila! The estimated fabrication mass in tonnes! Yep! Eight is steel’s density in tonnes/m³ rounded up a bit (maybe by 2%), but some rounding up is what you want anyway isn’t it?

As said, there’s nothing magical about it, but if I can’t do the three term calculation in my head, I can quickly scribble it out on a scrap of paper, or even scratch it into the dirt on a mine site; its value is in its portability and accessibility.  Additionally, with the ease that mass calculations jump out of computer aided design packages these days, it’s handy to have a wholly independent check. I hope this trick helps you. I’ll be back with another strength rule of thumb next time. In the meantime, please don’t hesitate to share any tricks you might have found valuable. 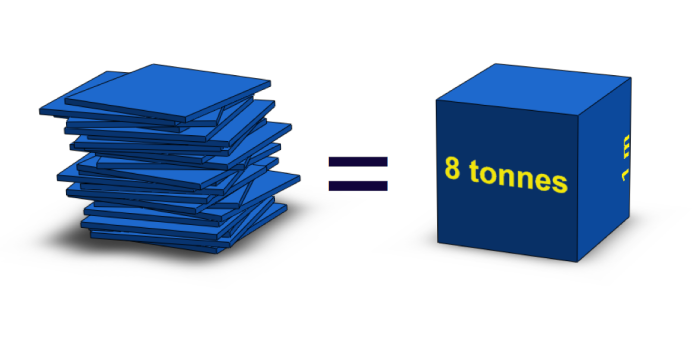 How often have you heard the expression “water is incompressible”? No matter how often, it’s never been correct; nothing is…
During more than 20 years in my prior role, I attracted a ‘reputation’ (equal parts praise and ridicule) for attacking…
Hello interweb!  Welcome to the first ever blog post for Quantise!    The aim is to share easily digestible engineering tidbits…