During more than 20 years in my prior role, I attracted a ‘reputation’ (equal parts praise and ridicule) for attacking many machinery problems using only a “stopwatch and a cardboard box”.  In typical Aussie fashion, it became an overused starting point for regular banter – “Wow! That’s an interesting problem.  Wait…, I bet Russ proposes some testing using his stopwatch :)”.

As you might guess, the label wasn’t wholly without foundation – I probably did (do) use a stopwatch more than your average consultant, but probably only because I spent (spend) more time than average underground.

Especially in underground coal mines, one needs to get as much as possible, using as little as possible.  As a handy guide, if it needs a battery – best leave it at the office (you can’t even wear your battery powered wrist watch on an Australian longwall).

The ‘right-tool-for-the-job’ needn’t have a digital readout, an SD card, Wi-Fi connectivity, or even a switch (cool and all, but sometimes unnecessary).  My arsenal of mechanical stopwatches, pressure gauges, tape measures, and sticky tape, has helped inform dozens of equipment purchase and upgrade decisions.

Fluid leakage through faulty valves, bypassing piston seals, and other hydraulic system defects, can extend roof support function durations and degrade longwall performance.  But how can you complete a quick assessment of the overall system leakage?  The answer is of course: “with a stopwatch!”

At the time of writing, all Australian longwalls use fixed displacement pumps, and they’re all driven at essentially constant speed by 3-phase induction motors.  A typical longwall pump might deliver 400 litres per minute (LPM) while on-load.  The pump output never changes (ignoring modifications and long term deterioration).  That is, if the pump is on-load, then 400 LPM is delivered; if the pump is off-load, then nothing is delivered.  Left at that, such a system would be useless unless you needed exactly 400 LPM some of the time, and exactly 0 LPM the rest of the time.  That situation of course never occurs, so longwall pump stations use a very clever trick; Pulse Width Modulation (PWM), albeit never called that at mine sites (it’s a term applied more frequently to very efficient ‘switched-mode power supplies’ as used in modern electronic equipment).  PWM allows fixed displacement pumps to efficiently deliver any flow rate at all (between the limits of 0 and 400 LPM with the pump adopted in this example).

For example, should a 200 LPM demand exist for precisely one minute, then a 400 LPM pump need be on-load only ½ a minute to make up the fluid volume sought.  A continuous demand of 200 LPM would require a 400 LPM pump to be on-load exactly half the time; 30 seconds each minute, 10 seconds in every 20, or any other 50% duty cycle.  But have you already spotted the problem? If 400 LPM is supplied while the pump is on-load, and only 200 LPM is being used by the demand, then where does the extra 200 LPM go?  Well that’s part of the trick…, it goes exactly the same place the 200 LPM comes from while the pump is off-load – accumulators!

While the pump is on-load (supplying 400 LPM), 200 LPM is delivered to the demand, and the other 200 LPM charges up the accumulators.  While the pump is off-load, 200 LPM discharges from the accumulators in order to meet the demand.  Voila! A 400 LPM fixed displacement pump system is supplying 200 LPM continuously!  Crucially, the system doesn’t throw much away; it’s very efficient (just like those switched mode power supplies).

Guess what happens if you need only 100 LPM?  Yep, the duty cycle must reduce to only 25%.  That is, the pump must be on-load only ¼ of the time, and off-load ¾ of the time; the on-load Pulse Width needs Modulating to 25% of the cycle length.  For 300 LPM it’s the other way around; on-load ¾ of the time, and off-load ¼ of the time (PWM with a 75% duty cycle).  The flow rate from this pumping system is infinitely variable, just dial-up the duty cycle consistent with whatever flow rate you need; it truly is a variable flow rate system.  But longwall pump stations go one better than that – they automatically dial-up whatever flow rate is demanded by the face activity.

System pressures don’t remain perfectly constant during the process described above; the accumulator pressures increase during charging, and decrease while discharging.  As such, pressure provides a very convenient signal to set pumps on or off load.

The main emulsion system of a typical modern longwall is rated at 350 bar.  As such, 350 bar would signal all pumps to be off-load.  On-load pressure settings for the first (‘primary’) pump are usually about 20 bar below the system rating, so typically about 330 bar.  While a longwall with 200 LPM leakage (this is high, but not unheard of) sits idle, 200 LPM discharging from the accumulators will eventually draw the accumulator pressure down to only 330 bar.  At that point, the primary pump would come on-load, supplying 200 LPM to leakage and 200 LPM to the accumulators (adopting our 400 LPM example pump).  With the accumulators now charging, pressures should soon increase to 350 bar, when the primary pump would unload.  For as long as the longwall remains idle, pressures would merrily cycle between 330 and 350 bar, the pump flow would flip between 0 and 400 LPM with a 50% duty cycle, and flow to the face (sadly in order to service nothing other than leaks) would gently undulate around 200 LPM (note, only ± 10 bar pump pressure variation about a mean of 340 bar drives an almost constant flow).  This is shown graphically below: 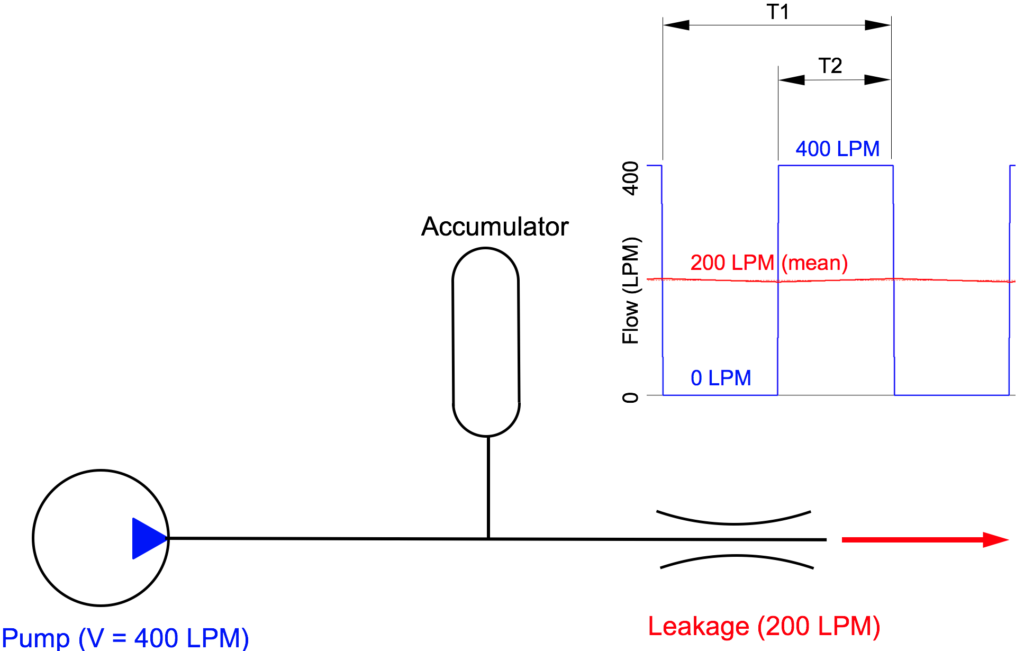 So what does any of this have to do with stopwatches?  While physically at the pump station, stopwatch in hand, measure T1 and T2 while the face is idle; the overall system leakage is T2 ÷ T1 x V.  Best to get 10 or more samples of T1 and T2 to be confident things are stable.

It might be tempting to use data logged at the mine site by the pump station control system, but this hardly ever works, especially if the pump cycle duration is only a few seconds.  The control system logging rate is rarely sufficient to accurately resolve the rising and falling edges of short pump cycles.  For example, if the sampling frequency is several seconds, you might capture only every second pump cycle, or even miss them entirely.  So named ‘aliasing’ is a topic for a future post, but for now, it’s what makes the wagon wheel spokes appear to rotate backwards in your favorite spaghetti western (or for that matter, the alloy wheel spokes during last week’s Formula 1 telecast).  In any case, it’s always recommended to go and look at these things – you nearly always find something unexpected.

Here are a few things to ponder until next time:

Until next time, please do not hesitate to make comments or ask questions.

I spent 25 years working for a world leader in large-scale flood modelling.  In true Aussie fashion, jovial belittlement of…
Hello interweb!  Welcome to the first ever blog post for Quantise!    The aim is to share easily digestible engineering tidbits…
Good grief! Is that the time already? This post is way overdue. I’m guessing I might have applied the rule…